Here’s Part 2 of our Games Centre advert archive from the pages of RPG magazine White Dwarf. This advert appeared in WD issue 55 from July 1984 and signaled the absorption of the store into the Virgin Megastore that it must have been right next to, or have actually been part of. An interesting thing is that I actually have memories of visiting this place on Oxford Street, when  first started looking for these adverts I didn’t realise it was the place I visited, I thought that was actually the Virgin store, but now that I know they’re one and the same it’s great to know I dropped in a couple of times all the way back in the 1980s. 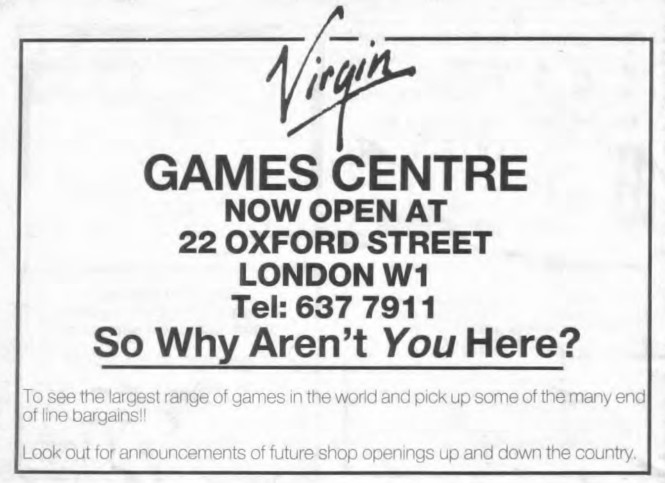 Looking for a job? Why not apply at the Virgin Games Centre now!

This generic advert appeared many times in White Dwarf over the years. But it also quietly highlighted another key phase in the Gams Centre history, a move of the shop further up the street to 100 Oxford Street, not sure of the exact date it happened but this advert appeared in December 1985.

This advert from WD issue 78 from April 1986 was the first of the more corporate generic looking adverts that just don’t appeal to me in the same way as the previous styles.

Here’s a final two interesting adverts in the form a yearly letter from National Games Centre Manager Bob Malin letting their customers know the sate of the stores and what to look forward to in the future.

So that wraps up our look at Games Centre in London, I’m not sure of the date the store closed or really any more info about it, we didn’t even get to see any pictures of the place, but it did bring back my memories of actually visiting the place at least once, so that’s great to know I stepped foot in there. If anyone reading these posts has any more info about any of the Games Centres stores, used to work there, has any pictures, stories, store bags or anything else interesting them please do let us know!

This isn’t the end of our London games stores features, there’s loads more to come as look at all the other stores we found in the pages of White Dwarf. See you soon!

One thought on “Games Centre – The Virgin Years”