Greetings, this is the first post in far too long, a few things have stopped me working on this blog, mostly that my job got super busy over the last year and also that I spend so much time working on the research and editing on DukeFest that I just didn’t feel like posting on here. But I also hate it when sites stop and go out of date, so it’s bugged me the entire time knowing that this blog was just sitting here getting older and older.

What spurred me to log back in and start up again then? Well a chance link that Evrim sent me about a long forgotten games shop on Hanway Street sparked my interested, firstly I’d never heard about the place and secondly Hanway Street is home to our beloved Bradley’s Spanish Bar, so knowing that there was at one time a dedicated role playing game store right there made me super interested.

Games Centre was the name of the store mentioned, which set me off on a google search for more information. Said search really didn’t reveal much info at all beyond a few brief mentions in forum posts here and there along with one tiny little magazine advert for the store which was so small that I couldn’t even read the text. So I had to take a more inventive way of finding out about this mysterious store, so where did I look? Yes of course, that bastion of role playing games from the 1970s onward: back issues of WHITE DWARF magazine! And guess what, we hit the jackpot in terms of GAMES CENTRE adverts. The first full advert appears in White Dwarf issue 6 April / May 1978 edition and you can see it below:

So Games Centre was based at 16 Hanway Street, London, W1A 2LS, which as of right now just happens to be the Kroean restaurant Han Kang. Odd to think that we’ve sat in there many times eating and didn’t know that several decades ago it used to be packed with RPG games and more. Next advert appears in White Dwarf 8 August / September 1978. 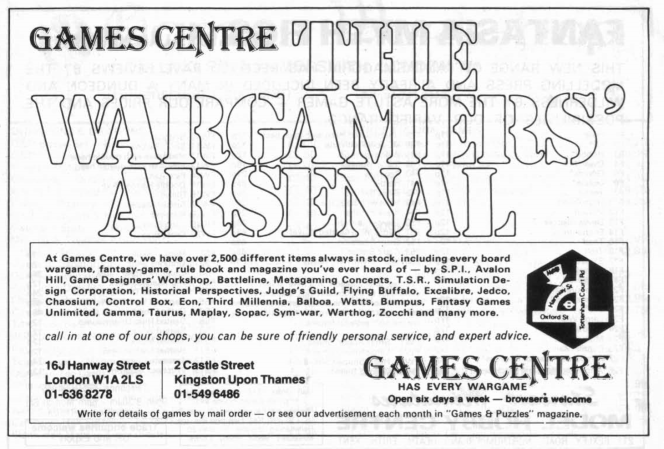 There’s no clear opening date for Games Centre, it’s mentioned in certain game adverts in the first issue of White Dwarf, which means it must have existed as far back as Summer of 1977. The adverts run up until White Dwarf 89 July 1987, when the magazine itself takes a turn away from RPG and starts to concentrate only on Warhammer, drastically cutting back on the amount of adverts featured in it’s pages, how long the store lasted we don’t know, but we do have lots of fun vintage adverts to look back upon. Here we go with the first batch: 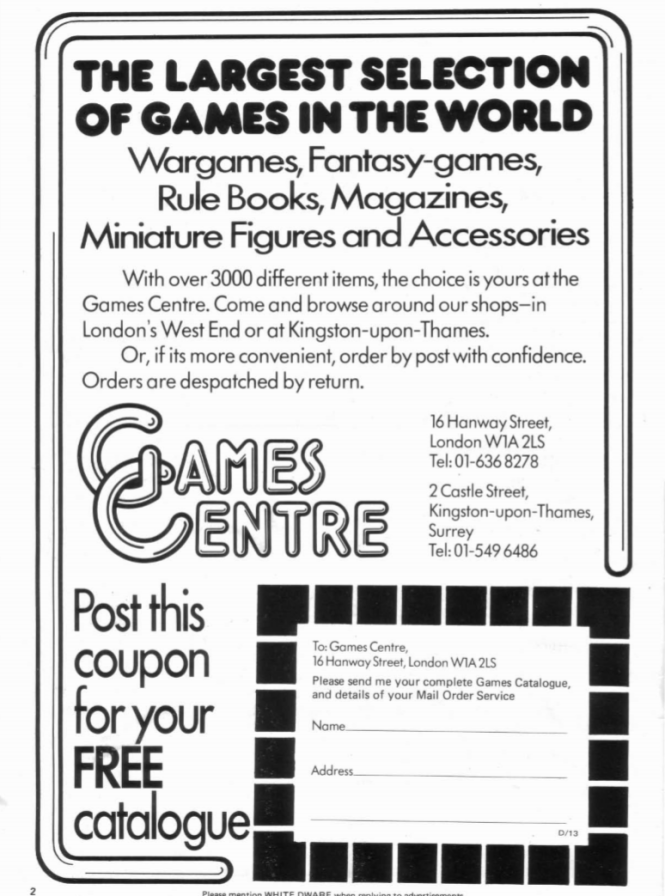 This next advert from White Dwarf 22 December / January 1980 / 1981 show the Games Centre expansion with the opening of a second dedicated gaming store on Denmark Street, which would have made it on the same road as Forbidden Planet.

Then, in what must have been a big move for them, Games Centre moves onto Oxford Street itself as mentioned in this advert from White Dwarf 23 February / March 1981, which would have put it right next to the Virgin Megastore at that time. 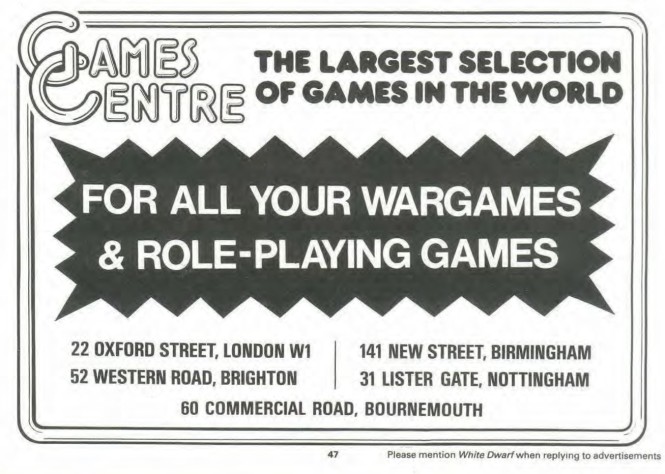 So as you know we don’t do anything by half measures I actually went through the first 100 issues of White Dwarf editing out all the interested London games stores adverts and anything else of interest, look for lots of posts coming up, with the next one being: Games Centre The Virgin years!