Come and join us for our sixth DukeFest as we take you on another four-night journey into the outer reaches of film! Get ready for premieres, trailers, 35MM action, found footage, VHS oddities and much more as we return to our two favourite venues in London:
The Prince Charles Cinema and PimpShuei! 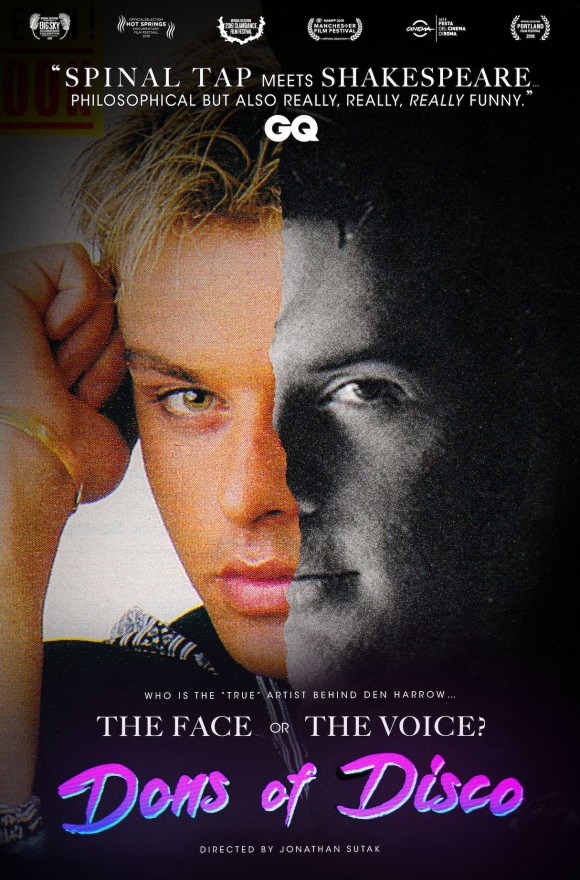 DukeFest 2019 opens with a story so outrageous that it can only be true! Delving deep into the mesmerising world of Italo disco, ‘Dons of Disco’ looks at the history of sensational star ‘Den Harrow’ and asks the question ‘Who IS the real Den Harrow?’ in order to expose a scandal so out there, it surpasses Milli Vanilli.

A break-out hit at Slamdance Film Festival, ‘Dons of Disco’ has been travelling on the festival circuit, amazing audiences everywhere and The Duke is proud to be able to bring the film to share with a London audience. A beautiful examination of the Europe disco scene as well as humane examination of two very different characters, ‘Dons of Disco’ follows Tom Hooker and Stefano Zandri as they both struggle to deal with the outfall of their fame – both men ARE ‘Den Harrow’, one the face and the other the voice and the struggle between them climbs to epic proportions hitherto unexpected.

Both a loving tribute to the Italo-Disco scene and the people behind it as well as a searing examination of human nature , ‘Dons of Disco’ is also laugh out funny with these two charismatic men making you believe that disco never died.

Found Footage 2019
We’re back with another brand new show of found footage VHS madness, we’ll take you through some of our strangest and funniest VHS finds from the last 12-months all remixed and re-edited by us just for this very night. Expect: religion, puppets, gambling, religion, how to guides, safety and even more religion. This is a 100% brand new show for 2019, no repeats!

The Mystery Film Experience
Take a chance with us on this very special mystery experience as Evrim takes you on a guided tour through a very very strange feature film, one that we never throught we’d every get the chance to see, but now we’re in a position to finally share it with you. What is is? Why are we showing it this way? Why can’t we tell you what is it? You’ll have to come and join us on the night as we can guarantee you’d never find this film on your own!

Evrim’s Hour
The Duke’s frontman and coolest cat in town is taking over the screen for an hour of surprises as he shows you things that only he can find! What might you see on the night: short films, safety films, strange clips, adverts and anything else he feels like unleashing on the night! Evrim is THE best film programmer out there so you know this is going to be something very special!

The New York TV Archive: Part 1
Join us for a very special show as we delve into a recently discovered haul of over 300-hours of vintage New York public access TV recordings! Yes we’ve combed through the first 150-hours of footage and we’ll be showing you the funniest, weirdest and most entertaining clips on the night in what’s going to be a very wild 90-minute show. Don’t miss this one!

In an unnamed city, somewhere in Europe, ‘She’ rules her religious cult with a violent streak to ensure they never stray from the path. But a series of unexpected events and a mysterious outsider threaten to tear the fabric of their existence apart with such intensity that even her iron fist will not be able to hold it together anymore. The end will be brutal.

A mesmerising debut by director Sonia Escolano, ‘House of Sweat and Tears’ feels like the love-child of Michael Haneke and Bela Tarr. With a sharp, distinct eye, Sonia crafts a brutal, claustrophobic world where daily humiliation, strange rituals and violent games all keep a group of believers in their routine in the most strict way imaginable.

Highly stylized and deliberately plotted, ‘House of Sweat and Tears’ builds unimaginable tension as it tests the group’s strength by exposing them to a series of unexpected events culminating in the arrival of a mysterious stranger whose gospel is the abject opposite of their leader. Battle-lines will be drawn and no-one will remain unscathed.

An absorbing, entirely monstrous cinematic experience, ‘House of Sweat and Tears’ is the kind of once-in-a-lifetime experience film lovers hope for all-year round. So come and join The Duke at the film’s only UK screening and experience a terror the likes of which that have never been seen on the big screen before.