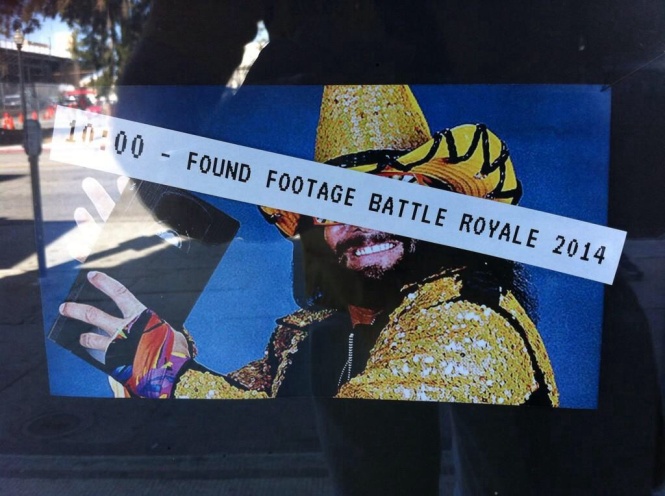 So this was the big one, today was the Found Footage Battle Royale – I’ll cut straight to the chase and let you know that I went out in the first round, my clip didn’t play well at all, hardly getting any laughs.

But before I get to the details here’s a quick look at what else happened yesterday. First up was The Death Of Superman Lives, we got a long intro from the director, then an extended 20-minute preview clip, followed by a long Q&A session. the documentary looked great and featured a load of costume design video footage,  this should be really interesting when it comes out. After that is was Handmade Puppet Dreams, which featured a great compilation of recent puppet short films, all of which we’re incredibly well put together. Then we had Kyle Mooney & Nathan Fielder’s YouTube Treasures, which was so funny, we had both of them take us through some of their favourite YouTube obscurities, I’d never seen any of these before, they’d uncovered some amazing finds.

Then it was time to do battle in the Found Footage Battle Royale, which turned out to be a lot simpler than I thought it was going to be. We all got lined up and Dimiti introduced us one by one, the house was packed by the way, every single seat gone. I got the microphone to say Hi when I was introduced, so great that Dimitri said me coming over was very special indeed! Then with everyone lined up against the far wall the clips commenced, they played one clips from all sixteen contestants, when it came to my one I was really excited, but as it went on no one was laughing with it, it got a few laughs he and. There, but just didn’t play well, the odd thing is that I’m used to introducing my clips and giving it some context, here they just play cold, with the audience having no idea what’s coming.

Then after all the clips we’re played the judges huddled together and decided who would go through the next round, and that was it, I was out! Which is fine, but I’d have loved to go through to the next round, but it just wasn’t to be this time around. So the battle continued and more people got cut as it went on, the clips we’re so good though, it was such a wild mixture of different things, not knowing what’s coming next really adds to the unexpected craziness of the night.

One of the great things about the night talking to the other contestants, everyone was so great and into it, it was so good to meet and chat with people who I’d only known by an online name. Also the atmosphere in the room is incredible, that really added so much to it.

And then it was all over, I had such a great time, yes I’d have loved to have gone further, maybe if I had my clips I’m a different order I’d have lasted longer, but I was only really there for the fun and it was such a great night. After that we all headed for the back patio and talked and laughed well into the night, it was just so much fun!