I’m always looking any obscure, unknown, offbeat films to check out and learn about, so while watching the 25th September 1980 edition of Top Of The Pops this brief but interesting reference by presenter Mike Read to a documentary about boxer Alan Minter got me very interested. Alan Minter, Prize Fighter is said to being on release shortly in 1980 and will feature a theme tune by the group Jigsaw, check out the clip below:

Now I’m not really a sports fan, but after the truly amazing Eric Bristow documentary Arrows I realised that Prize Fighter could be something similar, so I started digging around and couldn’t find anything about it at all. What I did find is the Jigsaw track Prizefighter, here’s a pic of the single label, clearly highlighting on the label the film connection with the text “From the film ‘Alan Minter – Prizefighter’. 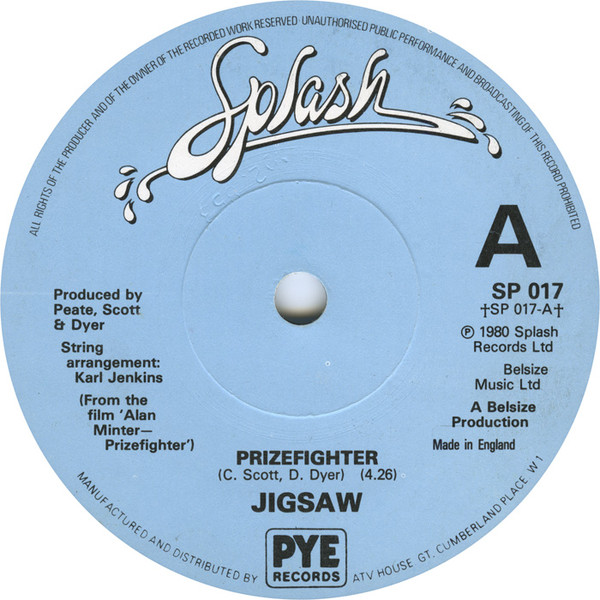 You can listen to the full Jigsaw – Prizefighter track right here:

The only reference I can find online to the film itself is over at the BFI website here. Even that listing doesn’t have very much information, it doesn’t say if it’s a short or a full feature or even maybe a TV documentary. It does list that it’s got legendary boxer Henry Cooper as the narrator though, which makes it even more interesting.

If you’ve not seen it I’d really recommend watching the Eric Bristow documentary Arrow here, it’s such a perfect glimpse at the UK in the late 1970s, working man clubs, seedy hotels and more it’s a really fun watch:

So there’s another film we can’t watch, no idea if it’ll be any good but at least we know about it now. As always if anyone knows more about the film, or even finds please just drop us a line!